6. Past Events
by Karen Eber Davis 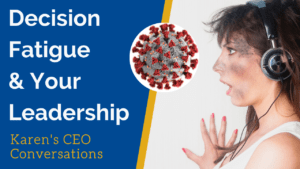 For Nonprofit CEOs and Executive Directors

How many times in the last two years have you made a critical decision? In all likelihood, too many!

Nonprofit leaders have faced weighty, rapid, and consequential choices, which is just a bit exhausting for you, your board, and staff.

And, while most of your decisions have been spot-on, some weren’t so good.

Which is why you’ll benefit from this conversation with your peers about Decisions Fatigue and Your Leadership.

How much did the percentage of critical nonprofit decisions you make change in the last 2 years? (you decide what = critical)

Karen:  Brian, what’s the food bank’s decision-making culture, and how has it hurt or helped you during this COVID pandemic?

Brian: I came to the realization some time ago that food banks are inherently opportunistic. You build infrastructure, and you’re trying to get this donated surplus food. That’s what we really do. It’s not food drives and purchasing food or anything. We try and capitalize on America’s food waste, and there are billions of pounds of it. There’s that opportunity for food waste. And then you got to get most of your actual labor from volunteers. And then you got to try and win donations from the community.

And then you’ve got to work out the logistics with all these different partners because we don’t actually generally work directly with the clients. We try and find other organizations to work with. So one way to look at it is it’s like you’re juggling balls, and you’re trying to get them to all to line up, and you try and get them to line up at the highest level you possibly can.

And so, given that you’re just opportunistic but really trying to push, a couple of things became very important to our culture. One of them was “a culture of yes,” and the other was “no punishment for mistakes.”

No Punishment for Mistakes

So no punishment. We actually mean that pretty seriously. This is actually a formal policy. It’s just as it says. What if you make a mistake? Your supervisor is not to respond to it. “You screwed up. How dare you.” But instead, “What went wrong? How do we learn from it?”

We try and orient towards actually trying to make things happen. And the philosophy here is not just driving out a culture of fear—which in any organization makes sense.

There are so many different opportunities and so much that has to be figured out and done that what we need is lots and lots of people being, feeling very free to make decisions and make things happen and not worried about being wrong, because the gain that we get on, the things we do right, are far greater than the losses that we endure when we screw up. It works pretty well.

A Culture of Yes

Very consistent with that, we have what we call a culture of yes. This was a realization I had years ago when I would see likesome local charity would say, “Oh, we’re trying to do a health fair, and it would really help if you guys could you bring produce to give up to the clients there. I asked your team if they could do it. They said, no, you just are too booked. Is there any way you can?”

Is it just like I’m some nicer person or something? And I came to the realization that it’s actually just the chair I sit in. If you’re the boss and somebody comes to you and says, “Hey, can you do this?” That question sounds like, is that a good idea? If you report to the boss or report to the person who reports to the person who reports to the boss, that question sounds like, “Will my boss think that’s a good idea?”

And if that’s how the way the question sounds, the safest answer is no. And again, because our work is opportunistic. It’s all about trying to really push to do things and, and you (and not the CEOs) figuring everything out and stuff.

So we said if you make a decision if you say yes to something and the better answer was no, not only are you not in trouble, again, no punishment for mistakes, but we’ll actually do your yes. Even if there’s a loss to do it, even it wasn’t a great idea. We’ll go ahead and do it. So you’re not even embarrassed by that and not being in trouble. But if you say no, when the better answer is yes, we have no problem overruling it.

COVID and Other Disasters

So this then brings it to like the disaster scenarios. So to us, COVID was just another disaster. With its own complexities and its own differences as everybody’s trying to navigate, but having to deal with hurricanes, ice storms, et cetera, they’re all things where we’ve got to pivot. You’ve got to aggressively try and do more despite all the obstacles. And it really requires some level of coordination. We have an incident command system that we utilize.

But greater than that is people willing to be independent decision-makers to make things happen. And then, try to just support that. So COVID really didn’t change it. We treated it like we would a hurricane, and we used our command system. It was mostly trying to encourage the pivots that they needed to make to keep serving.

Karen:  So by having a culture of yes, they’re already used to making decisions before the disaster happened?

Brian: Yeah. As much as possible.

One of the things to me is, actually funny. As much as you might seem like, yeah, that’s what everybody wants. Actually, more people are comfortable if you don’t give them that freedom. That’s part of the challenge, making sure that you’re kind of pushing and bringing up the people who actually like that. And then just either whittling out the people who don’t.

One of the things that we say is, “Try and make sure that everybody who, before they come in, is explained that if you don’t like change, this is the wrong place for you.” Because lots of people, they don’t want that. They don’t really want the responsibility. They just may say they do.

Brian: So our board is a true governing board. So this sort of like operating philosophy is not something that I needed to talk to the board about or something like that.

It became a board that is very comfortable with taking the multimillion-dollar a year risk because of all of the gains that we make other otherwise.

And it really was probably less a matter of conversation. It is just them living through the bads and the goods and seeing a lot more gain from the goods. So it was probably experience more than anything else that helped that.

When we have a hurricane, the community expects us to ramp up. And the challenge there is like, you have no idea what donations will be. Like, you have to invest in all of this additional infrastructure, but you don’t know for sure you’re going to get the support. You really could take a big hit. But once you’ve done that once or twice, they get very comfortable chasing very large bets.

Conversation participants are hand-selected to provide a mix of nonprofit missions and geographic settings.

What CEOs are saying about Karen’s Nonprofit CEO Conversations

Every one of the conversations has been fantastic. I have applied something from each one for my work.
Erica (Mossholder) Klauber
Executive Director
Children’s Craniofacial Association

It doesn’t have to be lonely at the top.

Karen Eber Davis Consulting guides executive directors and CEOs to generate the resources, boards, and support they need to make remarkable progress on their missions. As the award-winning thought-leader, advisor, and founding principal of Karen Eber Davis Consulting, Karen helps nonprofit leaders get answers, generate revenue, and grow their mission. Davis is known for her innovation and practicality based on her work with or visits to over 1,000 nonprofit organizations and her experience leading board and team events. She is the author of 7 Nonprofit Income Streams and Let's Raise Nonprofit Millions Together.