How to Resolve Board Member Conflicts – Are They a Jerk, or Do They Have a Point? 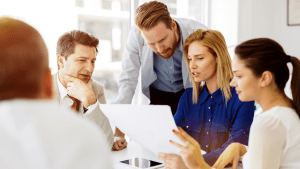 He was difficult. After working with hundreds of boards over two decades, he stands out.
Let call him Mr. Difficult. Everyone around him, and especially his family, walked on eggshells to avoid his tirades. His board service spun the nonprofit into chaos.
Looking back, I suspect Mr. Difficult had a personality disorder.
Are You Making This Common Mistake?
Mr. Difficult’s personality disorder was an exception. Most board members do not have them. (Only about 25 percent of board conflicts stem from personality issues.)
Most board members have a point.
When you assume that your most annoying board member has personality issues—and most of us do this—take care. Our next move after assigning labels is to manage them instead of taking their concerns seriously.
Unheard serious concerns can quickly seed board conflicts fester. So before you assign a label to your challenging board member, take care.
In fact, do more than take care. Create a log to capture and analyze board member interactions.
Capture Board Behavior
Logging behaviors encourages you to think about facts. Facts recorded in logs give you the luxury of perspective. (Looking at your log, you realize that even though it feels like Ms. Demanding’s on you all the time, she called three times this month.)
A log consists of a date, time, and an interaction summary and looks like this:
3/1/21 10:23 am, Ms. Demanding called. She is very upset about the board meeting. “The board spent no time on the expansion, and it’s the most important issue.” She assumed it would be discussed. When she brought it up, everyone was leaving. I promised to bring it up with the chair and get back to her.
Does Ms. Demanding have a personality order? Or does she have a point?
She’s been adamant about your expansion. And you’re nonprofit committed to doing the expansion. And the fact is, no one’s doing anything about it.
Ms. Demanding’s gung ho about your vision, but she has a beef with your tactics.
Ms. Demanding has a point.
At the next meeting, you thank her for bringing the issue and discuss it.
When she sees movement, Ms. Demanding transforms into Ms. Great Board Member.
You take a private bow. You resolved a potential board conflict.
What if It’s a Personality Disorder?
What if, instead, you’re dealing with Mr. Difficult? He calls daily, switches sides on issues, and is generally disruptive. Your log will be even more essential.
Your log record, according to one lawyer I spoke with, will stand-up in court. Less dramatically, it demonstrates the interactions without emotion. With it, you can work with your board champions to take thoughtful actions to reduce Mr. Difficult’s role.
Disagreements are a Benefit
Disagreements, as a rule, are healthy. When board members disagree, and healthy dialog ensures, your organization moves from fog to clarity.

Handling Your Boss, The Nonprofit Board. Nonprofit MBA Podcast 3.5

Don’t Fundraise Alone: How to Get Your Nonprofit Board Involved

How to Manage Your Nonprofit Board When They Refuse to Fundraise